Chanting nam myoho renge kyo is a truly powerful practice which can transform your life and mindset in hugely positive ways. There are a few ways you can focus your mind when chanting, but the practice becomes even more profound when you focus your attention on the meaning of what you’re actually saying. Not just the literal translation of the words, but what they represent. This mantra is rich in history and symbolism and can be interpreted in various ways, but all really coming down to the same general idea.

Back To The Beginning

Let’s start with a brief (and very basic) history lesson to really understand the significance of these words.

Everyone knows the gist of the story of the Buddha, the prince who renounced his privileged lifestyle and went off in search of solutions to the problem of human suffering. After years of asceticism and meditation, he eventually became awakened to the true nature of reality, or enlightened, while meditating under a Bodhi tree. After his Awakening, he spent the next 50 years travelling around the region of modern-day India and Nepal, teaching his insights. His teachings were passed down by word of mouth, and eventually captured in writing in what are known as the Buddhist sutras.

Throughout the time that he travelled and taught, his teachings were honed and refined as his own understanding of reality evolved. Therefore, the content of the various sutras differs slightly depending on when the teachings were delivered.

The Lotus Sutra is said to contain the Buddha’s most evolved teachings that he delivered towards the end of his life. One of the most significant aspects of the Lotus Sutra is that the Buddha came to realise that all beings, regardless of their karmic balance, poverty level, gender or physical condition, can become enlightened, within this lifetime. Previously, it was believed that people needed to generate good karma over several lifetimes in order to achieve enlightenment, so this was a profound development in the Buddha’s teachings.

A couple of thousand years later (give or take), along came a Japanese monk called Nichiren. After spending years studying all the Buddhist sutras, he concluded that the Lotus Sutra does indeed capture the essence of the Buddha’s final teachings. Taking things one step further, he also declared that any person could achieve enlightenment, and connect with their inner Buddha nature, simply by reciting the title of the sutra. Thus Nichiren Buddhism, and the practice of chanting nam myoho renge kyo, was born. 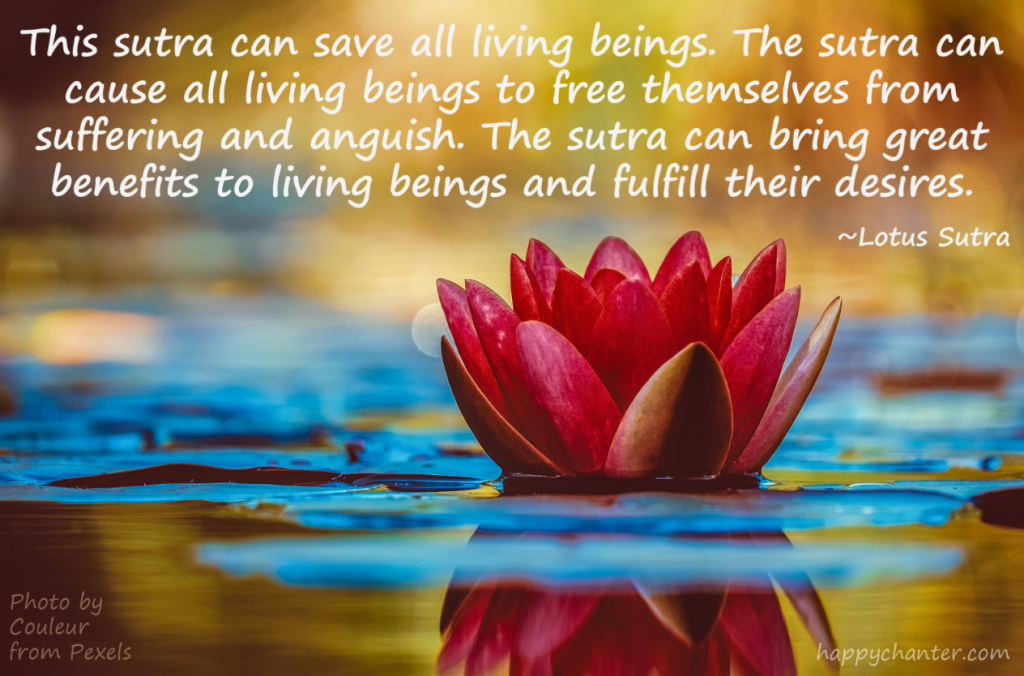 The main body of the mantra, Myoho Renge Kyo, is the kanji (Japanese interpretation of Chinese symbols) translation of the title of the Lotus Sutra.

Finally, the sutra title is invoked through the use of the word Nam.

Taken as literally as possible, then, nam myoho renge kyo translates to something along the lines of “I devote myself to the Wonderful Dharma of the Lotus Sutra”.

You don’t have to think about it in those precise words, though.

In the Irish language, “dia duit” means “hello”. The literal translation of “Dia duit” is “God be with you”, which would have been an appropriate greeting in an ancient culture of devout Christianity. Nowadays, more and more Irish people identify as atheist or agnostic, and would balk if anyone actually greeted them by saying “God be with you” (in English). Simply saying “dia duit”, though, carries no religious weight or resistance – it is the intent behind the words that counts.

Similarly, while it is important to know the origins and meaning of nam myoho renge kyo, there is no need to place any great emphasis on the literal translation of the words. The translation above may sound a bit too deferential or old-fashioned for some. As a one-time atheist with an aversion to the concept of “devotion” or supplication to any unseen being or force outside myself, I didn’t like the literal translation when I came across it. I want to Connect, sure, but I’m not into the idea of “bowing” to anyone or anything.

But that’s not it at all.

Myoho Renge Kyo, and later Nam, were the words that were used in a particular time and culture. They were simply the best words to use which resonated with people at that time. But the meaning and intent goes much deeper than the literal translation. There are many ways to interpret the mantra without losing the deeper meaning underlying it, and you are free to pick whatever interpretation resonates best with your soul, and use that intention to fuel your practice every day.

I devote myself to the Wonderful Dharma of the Lotus Flower.

I bow to the Mystic Law of the Lotus Sutra.

I align myself with the Law of Cause and Effect.

I connect with my inner Buddha nature.

I align myself with the Law of Attraction.

The creative energy of the Universe flows to and through me.

I Am spiritual energy, incarnate.

I Am a spiritual being having a human existence.

My outer life reflects my inner self.

What I put out, I get back.

I am a drop in the ocean of Universal energy.

I am the Creator of my own Life.

These are just some examples of how you might like to interpret nam myoho renge kyo. Some interpretations may be looser than others, but it all comes down to the same basic idea that there is a greater creative energetic process going on, and that this practice Connects you with that universal energy. It may be useful to reflect or meditate upon this, upon the meaning of the words in their historical context, upon how that original concept might be transposed into modern (or your own) understandings of spirituality, upon your own intentions and desires in dedicating yourself to this practice. Find the interpretation that resonates best with your soul, and use that to fuel the transformative power of the Universe to manifest that interpretation in your own life.

What’s your favourite interpretation of nam myoho renge kyo? Do you have another one that isn’t listed here? Share your thoughts in the comments below!