With a full day of activities planned, we woke up bright and early and headed over to the Sheikh Zayed Grand Mosque. “Grand” doesn’t even begin to describe the opulence of this building. “Immense” would be closer to the mark. Visible from many areas of the city, it stands out as the white marble jewel of the city. Even at night, spectacular blue lighting, which (incredibly) varies each night to coincide with the phases of the moon, draws the eye to the imposing domes. And that’s just the exterior. 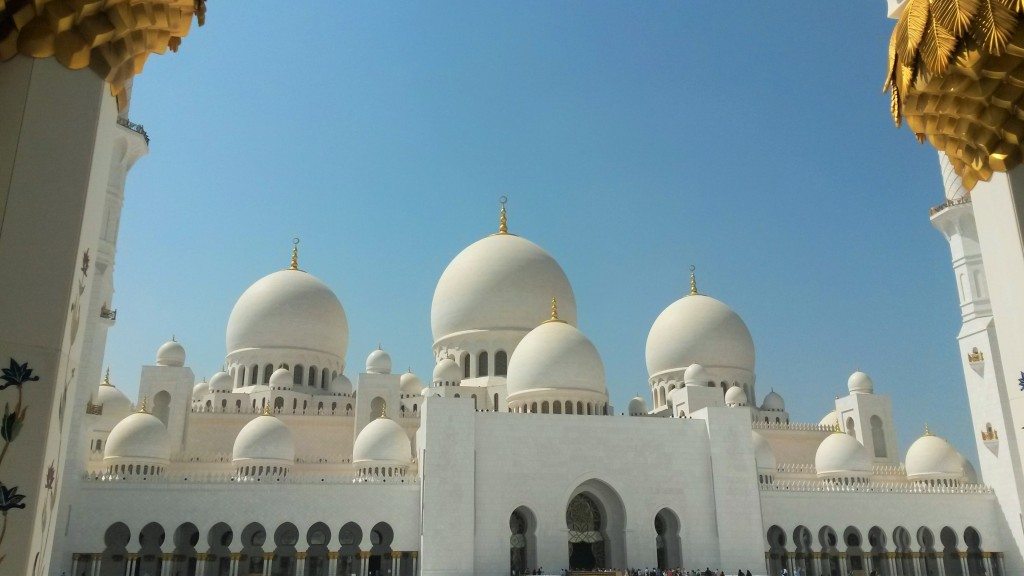 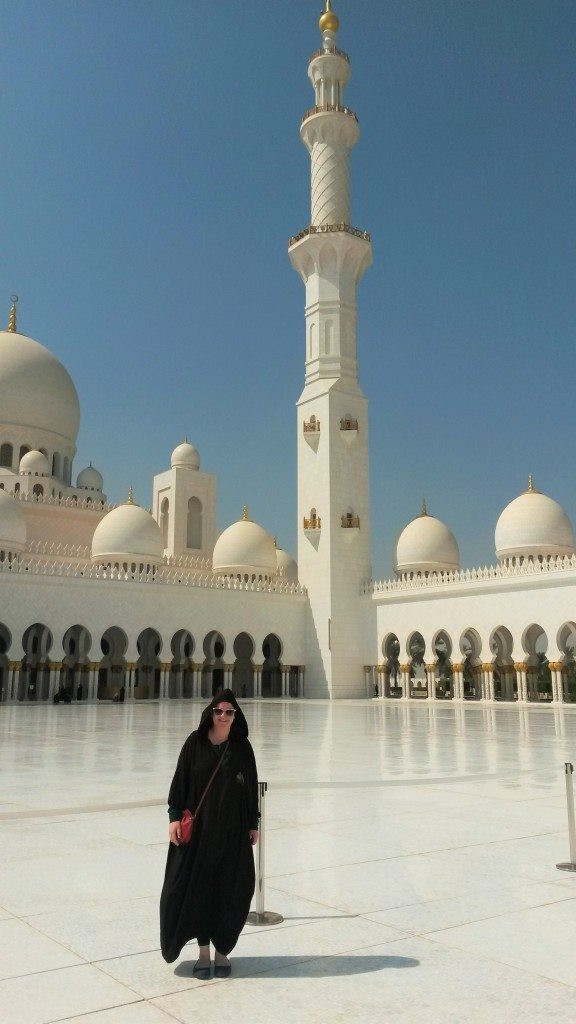 As you can see above, I’m rocking the traditional Muslim abaya. While Western clothing styles are generally tolerated in the city, in the mosque women are required to cover their hair and wear long loose clothing before entering. Abayas such as the one I’m sporting are provided to any women who are not already dressed appropriately. That’s fair enough, right? I ask because it reminded me of a university field trip and tour I attended in the East London Mosque last year. While that mosque wasn’t quite as strictly traditional as here in the Middle East, us girls were still requested to at least cover our hair. During prayer time, when we were allowed to view the prayer room from a gallery above until our guides returned from their prayers, somebody mentioned that some of the girls sitting by the window, and therefore visible to the men praying below, had their scarves around their neck rather than over their heads. I watched as they were asked to cover their hair, per Muslim custom, in a Muslim place of worship to which we had been invited. They did cover up, but with some eye-rolling and tutting (from some, not all).

It is a real privilege to be invited to witness someone else’s religious or spiritual practice, and treating with disdain a request to honour their customs is simply disrespectful. There are obviously ongoing debates in some circles about the clothing expectations and other rights of Muslim women, but whatever side of the fence you sit on in that respect, when you are invited to someone else’s house, it is just good manners to respect their tradition and throw a scarf over your head. In the much more conservative spiritual centre of Abu Dhabi, yes it is completely fair for us to abide by their rules when accepting the invitation to visit their sacred space.

Not that the invitation isn’t offered enthusiastically, as the architecture and design of the Sheikh Zayed Grand Mosque is clearly intended to be viewed and admired. Intricate artwork adorning every wall and column, stunning chandeliers, an immense 5700m² carpet which was hand-knotted by 1200 artisans. One of the largest mosques in the world, the sheer scale and beauty of the place leaves you stunned and speechless. 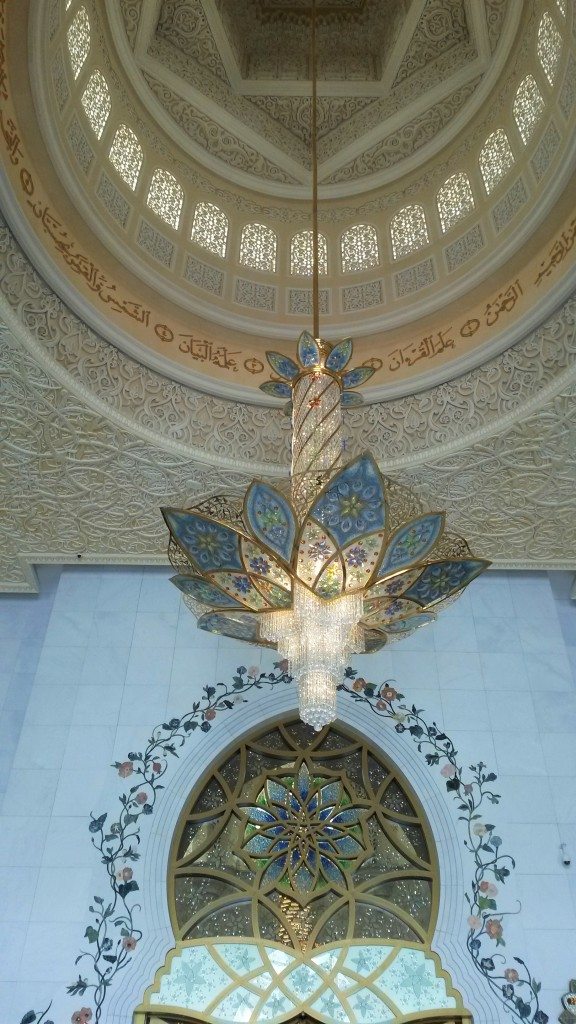 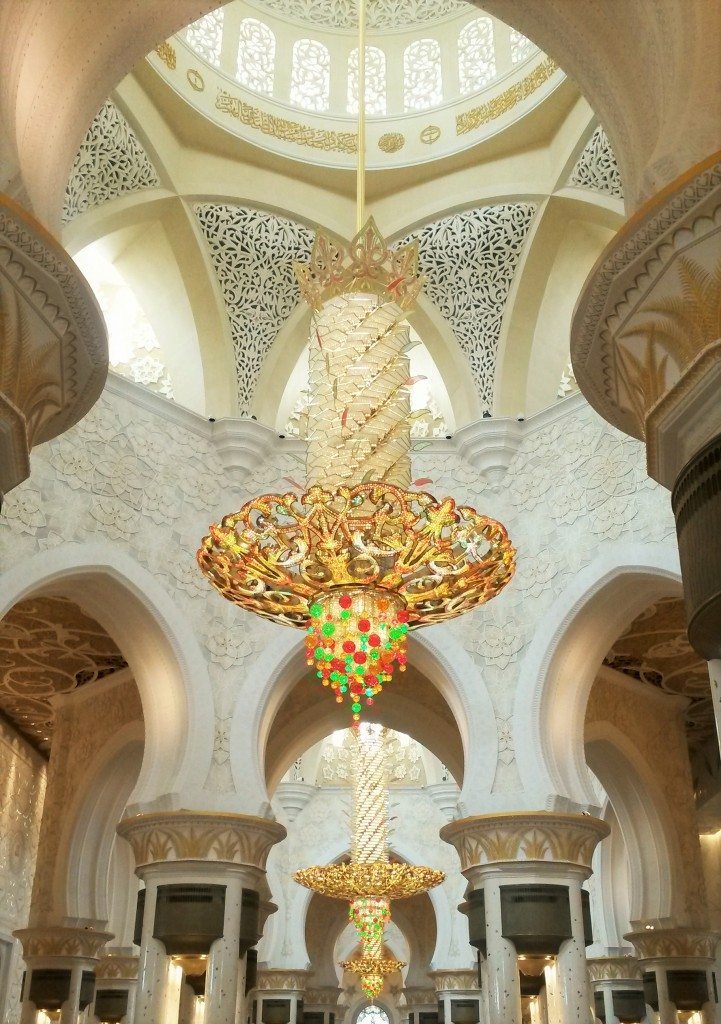 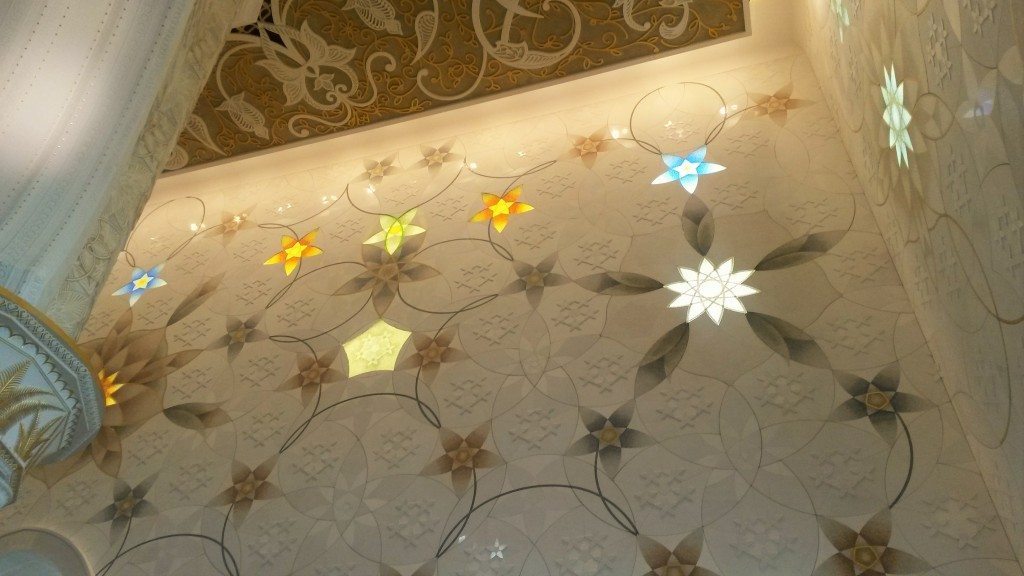 As we had further adventures scheduled for that afternoon, we unfortunately didn’t have time to take in a guided tour of the mosque, or even to stay for very long. But the short time we spent there was surely sufficient to admire and truly appreciate the vision and effort that went into creating this incredible site. I have my doubts about the necessity of all these grandiose bells and whistles in a place of worship, but there is nevertheless a genuine air of sanctity in this space. While I generally chant nam myoho renge kyo in solitude, spiritual practice in a group adds such a wonderful energy to the air, so I can only imagine how simply phenomenal it must be to be joined by 40,000 fellow believers to pray in such a beautiful and sublime sanctuary.