Now that I’m finally decluttered, packed, goodbyed out and all ready to go, it’s time to fly!

Going from Dublin to Thailand is a looong journey, and as my lovely friend Cait lives in Abu Dhabi, it made sense to take a long transfer there and visit her for a few days. I also figured that Abu Dhabi could be a nice introduction to life in Thailand – they’re both pretty hot, right? As I soon realised, that is pretty much the only thing these places have in common. My time in the desert was awesome fun and an eye opener to a wealthy and extravagant world, but ultimately my short visit served to reinforce my decision to locate myself in the rustic charm of SE Asia. Abu Dhabi is definitely worthy of at least a visit though, so follow this series to discover just how much fun and amazement we managed to squeeze into three short days!

The Start
I arrived late in the evening, so we didn’t have time to do much else than have a quiet drink and catch up. Nothing much to write home about, then, right? Wrong! There’s nothing nondescript in this town. Bentleys Bistro and Bar offered a hint of the kind of opulence I could expect over the coming days. Firstly it was located within a shopping mall, which is common in the UAE, where alcohol isn’t as widely accepted as other places. Bars are generally only permitted in malls or hotels. Walking through the mall to get to the bar we passed stores like Gucci, Alexander McQueen, Dior, Fendi – it’s pretty clear up front that there is money in this town.

Upon ordering a simple salad and fries, the waitress came over with a bread basket. Pretty standard, right? Not when it’s not so much a basket than a shiny silver shoe! And not when the bread rolls include beetroot and white chocolate! Nom! I was also astonished that the wine was poured into jet black wine glasses. I thought this was just another stylish touch until the waitress explained later that, again, this is due to the local attitudes towards alcohol – as locals could walk past the terrace and see us, they couldn’t allow alcohol to be visible in transparent glasses. Travelling to new places and cultures opens your eyes to the different ways people live in different societies, and this was the first of many fascinating quirks of an unfamiliar traditional Muslim culture.

The Middle
There is just too much to describe about the activities we took in over the following days to squash into one post – the opulence of the mosque, the desert safari adventure, and the indulgence of Friday brunch each deserves its own write-up, so click the links to read all about those amazing experiences!

To neatly sandwich this post, let’s go from the first experience to the last. On the day I flew out, we visited the Emirates Palace. Despite the name, this impressive building is actually a hotel, but I hesitate to describe as “just” a hotel. It is owned by the Abu Dhabi government and was originally intended as a deluxe Arabian landmark and conference centre until the decision was taken to accommodate guests as a hotel. The architecture and decor are certainly worthy of royalty, offering the most luxurious accommodation you could ever hope for. 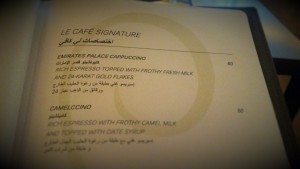 Tourists are permitted to explore the lobby and public areas, and to enjoy a coffee in the luxurious cafe. 24-carat gold flake sprinkles, anyone? Unfortunately at €550/night for the cheapest room, a stay here is just slightly out of budget so I won’t be exploring beyond the public areas anytime soon. Those areas that were accessible to us were stunning enough on their own though. The immense lobby features an ornate dome, and a gold vending machine! Only in the UAE… The gentle tones of the live piano adds an air of peace and relaxation to the stunning space. Ornate tapestries frame the dual staircase. The decor throughout is lavish. The hotel even includes a private beach, although we as tourists could not access. Overall, Emirates Palace, which cost a whopping €2.8 billion (yes, that’s a “b”) to build, serves as another showcase of the wealth that is clearly abundant in Abu Dhabi. I’ll let the photo tour below tell the rest of the story…

Ultimately though, while a hotel like this is stunningly beautiful, and the luxury it promises is no doubt enjoyed by those who can afford it, I can’t help but feel that this kind of lifestyle is somewhat removed from real life. Not only that, but it reminds me that all the money and luxury in the world cannot bring happiness. You could say that my decision to fly away to a tropical island is just as removed, but for me the difference comes down to wealth, and the value placed on it. Those who are driven by the accumulation of money and possessions for their own sake are missing the point of it all. Life is what is precious, a gift, to be lived, as an adventure, to immerse yourself in the full range of human experiences and emotions. You do not need millions in the bank or your own private butler or chocolate on your pillows every night to live in a joyful way, to wake up smiling every day, to be grateful for every small thing you have, for the very fact that you are alive. Life on a tropical island is a million miles away from the daily 9-to-5 grind, true – but the reason I came here is simply that one does not need much to live well. I have my little one-room bungalow, cheap food, stunning nature around me (bugs and all), breathtaking sunsets, and am greeted with smiles every day by local people who couldn’t even imagine the lavish lifestyle of the UAE, and who, I would wager, wouldn’t understand the point of it. Here, after basic needs are fulfilled, an easy pace and a happy attitude make up the riches. I’ll take that over a palace any day.