Last week’s blog post about the meaning and possible interpretations of Nam Myoho Renge Kyo generated some interesting discussions online, especially around one particular example: “I Am God”

I can very much relate to a certain level of resistance to a term that is inherently associated with a monotheistic concept, especially when used in the context of Buddhist practice and modern spirituality. I used to be just as opposed to the concept myself, but I wanted to explain in a bit more detail how I now think about God, and offer some more food for thought and discussion.

I have a very vivid memory from when I was a child, maybe about 6 or 7. I was attending Mass with my family, something that many Irish families often did as more of a social habit (or almost an obligation in a traditional Catholic society) than out of any real sense of devout religiosity.

In a Catholic Mass, there are prayers that are recited by rote, and cues for standing, kneeling or sitting at various points in the service. I remember looking around at this church filled with grown-ups, those smart big people who I was supposed to look up to and emulate – and I really couldn’t wrap my head around what they were doing. Why are they standing or kneeling at certain times? Who makes up those rules? Why are they giving such “thanks and praise” to some invisible man in the sky? Their tones are so dull, are they even really thinking about what they’re saying? If this guy really exists, why doesn’t he just show himself? And if he’s such a nice guy, why are we always begging him for “mercy and forgiveness”?

The whole concept of organised religion never sat right with me, and I think that was the day I decided, “nah, that’s not for me”. From then until the day I first started chanting nam myoho renge kyo some 25 years later, I just had no interest in religion or spirituality.

Even after I became a spiritual seeker through my introduction to nam myoho renge kyo, I still had a strong resistance to the word “God”, to the idea that some external force was calling the shots and passing judgement upon me.

I’ve now changed my view – not about that resistance to an external puppet-master, but certainly about the word and what it truly represents.

The True Meaning Of God 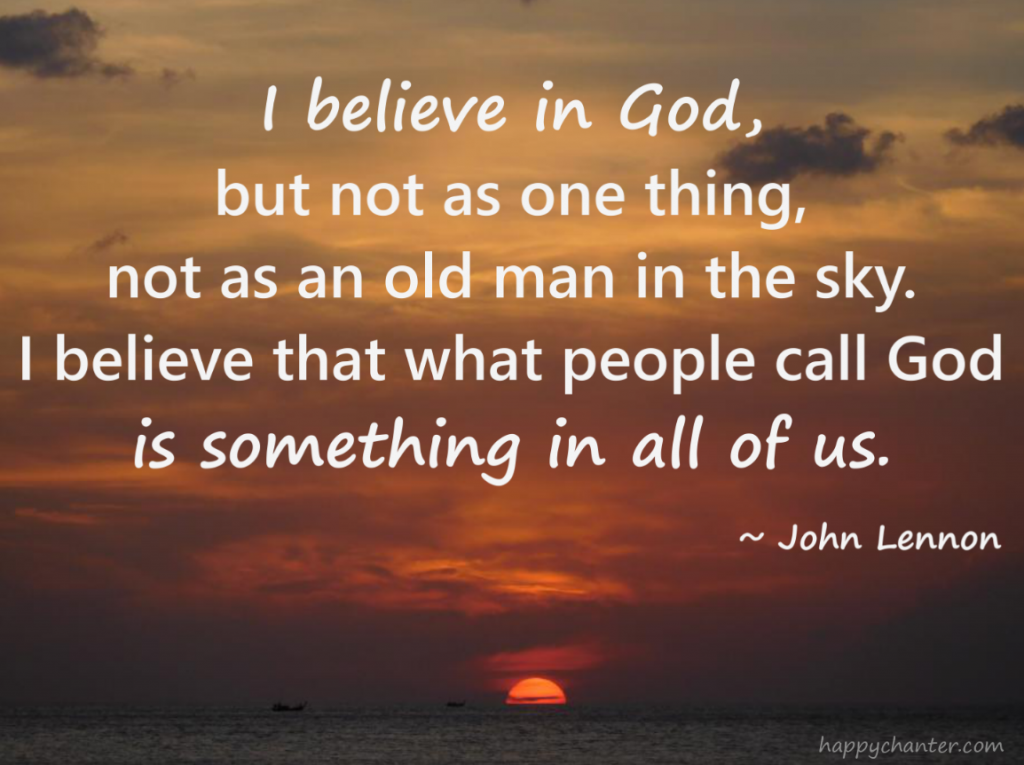 That field of All-That-Is energy is a creative force. The Universe thought itself into a physical existence (or, “God created the heavens and the earth”), just as you can create your own reality through your thoughts, which flow at a higher creative state the more you raise your own vibration through gratitude, compassion, love, and spiritual practices like chanting nam myoho renge kyo.

So, when I use the word “God” now, I don’t refer to the monotheistic idea of of the “old man in the sky”, which is somehow separate from us. Rather, I think of God as the divine creative energy that permeates everything around and within us. You could substitute the word “God” with “the Universe”, “Spirit”, “the Mystic Law”, “Allah”, “Source”, “the Law of Attraction”, “Brahma”, “Mother Nature”, or any one of many others that are all simply words, used by different peoples in different contexts, to (try to) describe that divine energy which we are all fundamentally connected to and part of.

When we practice, we are opening and strengthening our Connection to that energetic whole, through that divine aspect of ourselves, our Higher Self, our Soul, our Buddha Nature – again, many words describing the same thing. You can use whatever words resonate with you – I usually end up chopping and changing between them all! Whatever terms you prefer, Know that you are part of something greater, you are a conduit for the creative energy of the Universe, you are Spirit incarnate, and yes, in that sense, You Are indeed God.

Raise that beautiful divine head of yours high and own it, live it, love it 💖

26 thoughts on “God, The Universe, and Everything In Between”